(Through The Past Darkly Revisited) 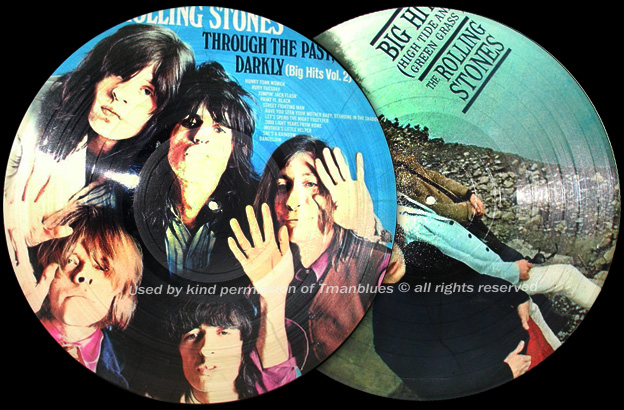 Let me present to you something that goes unsolved for such a long time....
Last year, January 2011 (see link: through-past-darkly ) I published a post on the "Big Hits" prototype picture discs made ​​in (probably July/August ?) 1969, rarely seen and mentioned by collectors... Recently, I had the good fortune to share some exclusive info with two new friends, curious about how I knew about these less-known prototypes. Personally, I knew little more than what I´ve published, and I was surprised when contacted with all accuracy of the details, the correct number of pressings/runs (to believe in GOLDMINE guide) and, especially, by their professional CV. I'm going to transcribe some relevant shared info so that there is no doubt about what we are describing in here:
According to Tmanblues who owns these prototypes;
"(...) there were actually two runs of these picture discs, first run has the Stones Big Hits - Green Grass picture on one side and Ten Yearts After´Ssssh on the other side with various cuts of non-Stones music to test the sound quality...This was the first run. After the test was done a second run that has the Through the Past Darkly music on both sides. I have one of the first run and one of the second run (...)
(...) I believe there were a total of 15 between the first run and second run. The problem was that it was basically a cardboard picture under the clear vinyl and the clear vinyl did not hold the quality of the music, which is why the project was scrapped (...)"


"(...) I originally had 3 discs or 20% of the original 15. As I noted one was prototype 1 and had Green Grass and Sssshh on the two sides for pictures and various cuts of music (non-Stones) just to test the vinyl with country western, classical, jazz etc... I had two (discs) of the Prototype 2 which had the entire Through The Past Darkly music on both sides with a Stones picture on one side and Ten Years After on the other. Here is where we get sketchy, I only had three, that is all I ever had, so I can't tell you about the other twelve (discs). If I recall correctly the one I gave to sixtiestoyguy was one of the prototype 2's and it has Green Grass with the Sssshh pictures on the two sides but the Through The Past Darkly music on both sides. Since I had the prototype 1 with the Green Grass/ Sssshh picture, I kept the prototype 2 with the Through The Past Darkly/Stonedhedge picture and the Through The Past Darkly music on both sides. No serial #'s numbers to my knowledge, they were just tests copies to see if the idea would work. I don't even think you can play them any more as the music deteriorated off (...)" 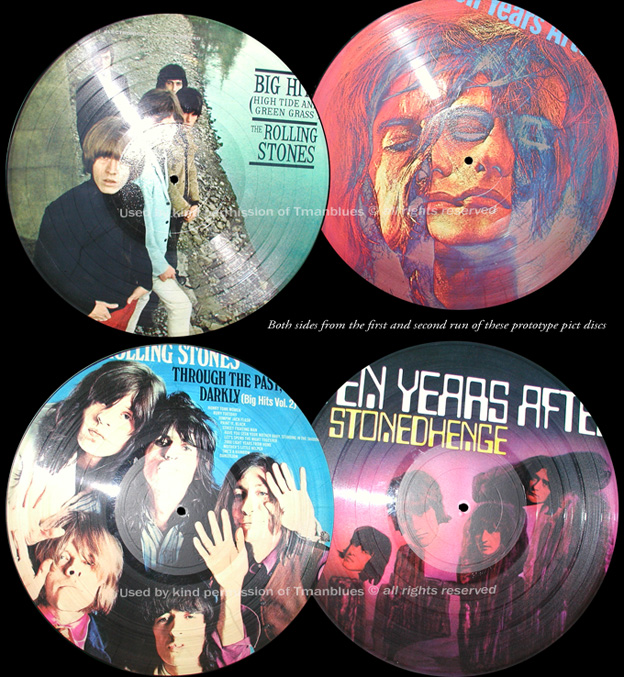 "(...) I can not tell you what the picture/music was on the other twelve (discs). Never saw them, just the three I got. Now as far as the company manufacturing them and my Dad's work at that time, if I remember correctly my Dad was working for the custom manufacturing department for CBS records and they were being manufactured for Atlantic Records. I believe that to be correct, but my Dad could have been working for PRC Manufacturing who did custom manufacturing (they did the manufacturing of Zappa's Barking Pumpkin labels) as the record they produced was slightly higher grade than average manufacturing and Zappa was a freak about the quality of the disc, but I think that was a couple of years later. After Zappa sued Warner Bros and got the rights to his WB catalog back, he put them out in three (or was it two, me thinks it was three) different 10 record box sets. I have set 2 autographed saying "Merry Xmas Frank Zappa"). So I believe it was his CBS Records custom pressing days (...) PRC Manufacturing was also a leader in introducing the CD to the American market place. PRC stood for Phillips Recording Company, part of Phillips in the Netherlands ????...not sure, long time ago (...)"


"(...) I am no expert on matrix numbers and it is sorta hard to read but on prototype 1 various cuts of music,
High Tides and Green Grass
39351 WS171,1A .ID or 39351 WS1741 .ID
This one is hand inscribed hence the question of either or...
Ssssh
XSM150221 -1C
Stonedhenge
This one is block number/letters on prototype 2; Stones-music on both sides
ZAL 9134
Through The Past Darkly
This one is harder as it is partially cut off at the top but I am going to assume it says
ZAL 9133 - these are both hand inscribed (...)"
"(...) has already checked out the matrix and agrees on the Through The Past Darkly music picture disc are London Records #'s and also agrees that the numbers on the prototype 1 are useless since they are just various cut of music thrown together (...)"
According to sixtiestoyguy:
"(...) Tman knows of which he speaks. His father would frequently come home with test discs, new artists, etc... and he gave one of those first run Stones discs to me, too. However, I sold mine during the hey-day of picture disc collecting. My memory says that we were told seven discs in total were made, not fifteen. Apparently, these were created to test a way to graphically imprint the disc, negating the need for costly exterior packaging. Unfortunately, the lamination technology was not up to the task at that point in time; it would be a decade before picture disc technology was mastered (...)"
Hold on now, you freaky Stones maniacs;
Tmanblues says:
"(...) I am willing to sell at this point (...) They need to be sold as a set, so in answer both (...)"
(...If U R tuff enuff 2 make an offer, just let us know...)
Publicada por half-nanker em Thursday, June 07, 2012