A Film about Jimi Hendrix 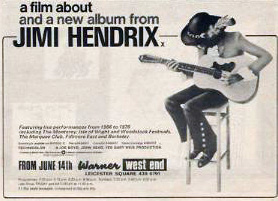 The London Rock And Roll Show 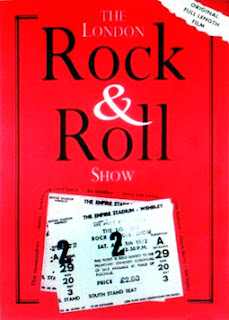 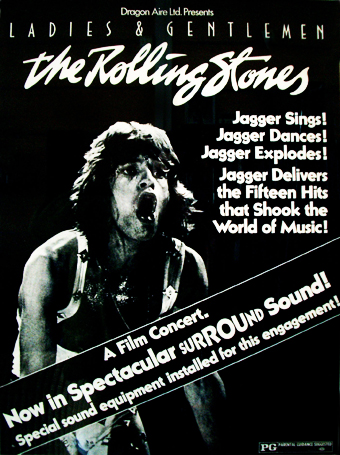 A concert film taken from Rolling Stones 1972 North American tour. Some concerts were recorded in 32-track and the soundtrack was mixed in Twickenham Studios in England. The film was blown up to 35 mm with a "fluid gate" process for theatrical release. Initially, US theatrical run was released in "Quadrasound" and it was played in limited road show engagements. Limited engagements were conducted in New York, Boston, Philadelphia, Atlanta, Houston, Chicago, Miami, and Los Angeles before the picture was sold to Plitt Theatres which released the film in a "flat" screen monaural version. The movie was only commercially available in the early ´80s in Australia on VHS, besides the numerous bootleg copies been circulated elsewhere. On September 16, 2010, a newly digital re-mastered HD digital version of "Ladies and Gentlemen: The Rolling Stones" was shown in select theaters in the US, presented by Omniverse Vision, Eagle Rock Entertainment and NCM Fathom. Also features an introduction by Mick Jagger, interviewed in summer 2010 at the London Dorchester Hotel. This film was released at selected showcase cinemas in UK the following day, on Friday 17, September 2010. On October, 2010, it was issued on DVD and Blu-Ray with bonus features, and also on a limited deluxe "Ladies & Gentleman...The Rolling Stones" edition box set.
Track listing: Brown Sugar/ Bitch/ Gimme Shelter/ Dead Flowers/ Happy/ Tumbling Dice/ Love In Vain/ Sweet Virginia/ You Can’t Always Get What You Want/ All Down The Line/ Midnight Rambler/ Bye Bye Johnny/ Rip This Joint/ Jumpin’ Jack Flash/ Street Fighting Man 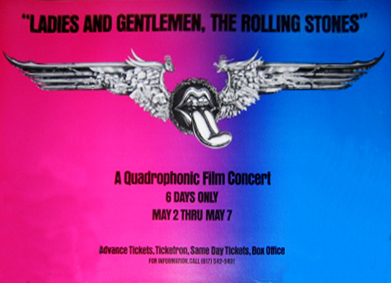 ?
?I can´t figure what´s that playback on stage during "Happy"?
On old boot videos and also on the new restored version, you can easily figure that´s definitely a pre-recorded track and vocals,
with Jagger missing some lines and more (ex.: 0:44 sec, just notice Jagger´s expression, but look carefully, there´s some more...).
Could be a promo-video for "Happy" on stage and without audience... but included it in the movie?
link below:
Ladies&Gentleman Happy 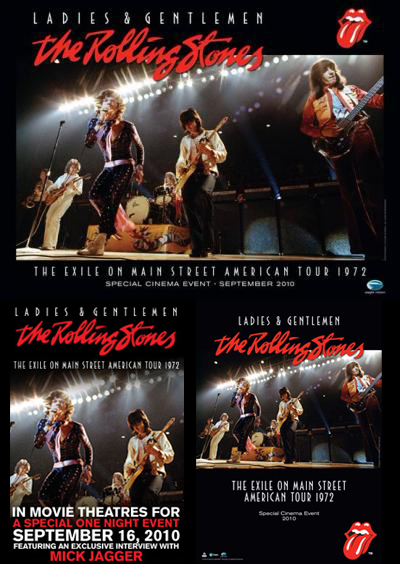 Of all the tours the Rolling Stones have made across North America, the 1972 tour is still remembered
as the most outrageous "Stones Tour Party" ever.
Cocksucker Blues is one-a-kind document of this tour, probably one of the very best rock tour movies
ever made, and never seen.
A look behind the scenes at a never-ending private party, with some songs tossed in, was so over the top that the Stones banned its release and obtained a court injunction against its distribution. For Robert Frank, the real performance was everywhere but the stage. He finally got the rights to screen the flick more than once a year. 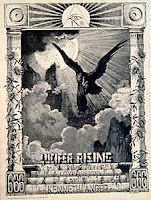 This film embraces its demonic inspirations and energies, channeling an arcane series of references to Egyptology and the occult practices of Aleister Crowley and expressing their meaning in cinematic terms. Superimpositions, associative flash cuts, venetian wipes, seesaw tracking shots, a complex, oddly moving rock score by Bobby Beausoleil, and Marianne Faithfull are all woven into an effortlessly lucid stream of violence, sex, death and cosmic consummation. Lucifer Rising is a pure ritual, literally and figuratively.
Lucifer was originally played by Chris Jagger, but squabbling between him and Kenneth Anger led to Chris returning to London and Anger taking over the role.
The score for the movie was composed by the incarcerated killer Bobby Beausoleil, one of the infamous Charles Manson family killers. He was in jail when he made the score.
Originally Kenneth Anger wanted Jimmy Page to score the film but he didn't care for the music when Page finally delivered. A bearded Page makes a brief appearance gazing at a portrait of occultist Aleister Crowley. The special effects are courtesy of Wally Veevers who also worked on Stanley Kubrick's 2001: A Space Odyssey.
Publicada por half-nanker em Thursday, July 26, 2012 No comments: 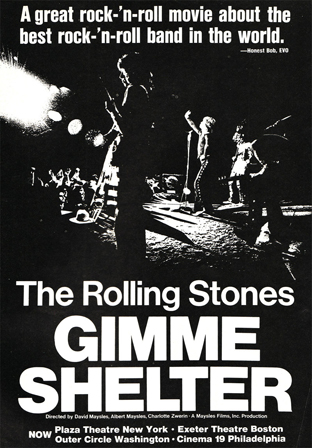 A commissioned movie, the preceeds from which are to help the Stones pay the costs of the free concert, Gimme Shelter stands today as a landmark documentary of a band and a generation on the edge of a decade(ence). What starts as an electrifying record of the Rolling Stones’ performances on their fiery 1969 American tour turns into a deeper, darker film of the events that culminate in the Altamont concert.
From the beginning, we see scenes of the Stones screening a rough cut of the film on an editing table, experiencing the chaos they created, and lets us know what´s to come in the devastating final. When the band finally makes it to Altamont, from the first shot you can sense the menace. The Hells Angels and the audience get increasingly wasted, and the Angels’ crowd control turns rough quickly, by the time the Stones come on, the crowd and the people who were supposed to keep order are openly fighting. According to reporters, no one tried to stop the Angels from beating the crazed girls and boys who climbed onstage or didn’t follow instructions; they were hit with leaded pool cues and with fists while the show went on... a mesmerizing but creepy film also. 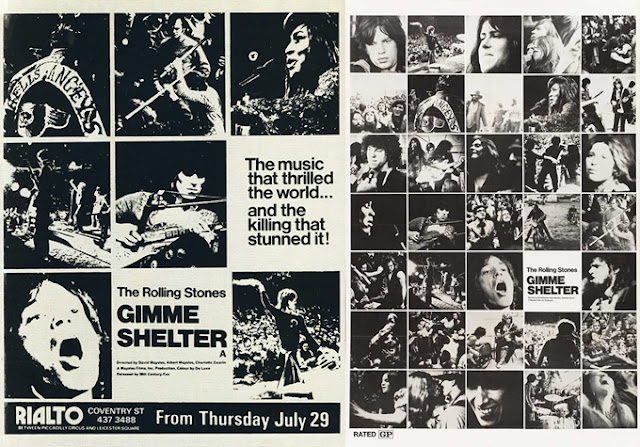 A definitive new high-definition digital transfer of the uncensored thirtieth-anniversary version of Gimme Shelter was released by Criterion Collection in the early´2000s, including performances by the Rolling Stones at Madison Square Garden in 1969, including “Oh Carol” (2 different versions on video and on DVD) “Little Queenie" and “Prodigal Son" plus backstage outtakes and footage of the band mixing their album, audio excerpts from KSAN Radio’s Altamont wrap-up, an outstanding booklet and more. In November 2009, the "Get Yer Ya-Ya´s Out!" album was reissued with unreleased songs by opening acts B.B King and Ike & Tina Turner and The Rolling Stones. It includes a 56-page booklet and a DVD with bonus tracks:
Intro (Madison Square Garden); "Prodigal Son" (November 27, 1969: MSG); "You Gotta Move" (November 27, 1969: MSG); "Under My Thumb"  (November 28, 1969: MSG - first show); "I'm Free" (November 28, 1969: MSG - first show); "(I Can't Get No) Satisfaction" (November 27, 1969: MSG)

The movie tells the story of Ned Kelly's life.
The Irish immigrant has lived in north-west Victoria all his life, but has never been very welcome by the authorities. The police always accuses him of everything they can think of and they keep harassing his family. When Kelly is fed up with the way everything goes, he forms a gang with his brother and two other men. They start robbing banks and even hijack an entire town for 3 days. All this violence leads to a man hunt organized by the police and when they kill three policemen, they are outlawed. Finally they take over a pub in Glenrowan, where they have a party with all the visitors, waiting for a train full of police to derail at a part of the track that they tore up. But the train is able to stop in time because someone warns them and what will follow is a battle on life and death between the police and the four gunmen...
Mick took the title role and contributed to the soundtrack on one song "Wild Colonial Boy". 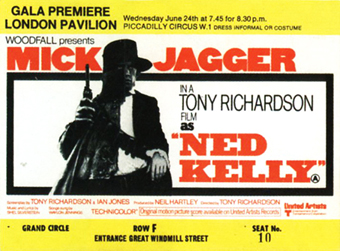 'A Stone In The Bush'

An experimental 16mm documentary on the making of Ned Kelly (filmed in Australia, July-September 1969).
A film which features some Rolling Stones songs over footage of Jagger goofing and flirting with fans between takes

Clifton was born in Sydney, Australia. He started his career filming clips for Top of the Pops and working with Andrew Oldham´s Immediate Records. One of his first experience in film production was What´s On The Flip Side?, a 45 minute 16mm b&w documentary on the Rolling Stones 1966 Australian tour, featuring a live performance of "I´m Movin´ On". He also directed and produced Now Time, a TV series broadcast in 1968, with 13 half-hour episodes about the swinging London scene, featuring The Rolling Stones, Procol Harum, Cream, Vanilla Fudge and more. Between 1967 and 1969, Clifton began assembling his first feature film, an experiment in music, colour and effects with performances by the Rolling Stones (actually the promos for "Jumping Jack Flash" and "2000 Light Years From Home"), Vanilla Fudge, the Bee Gees, Joe Cocker, Traffic, the Animals and others. Popcorn established Clifton as one of the leading live music film directors of the period. In 1971 he directed Superstars in Film Concert, shot in 16mm b&w featuring John Lennon and the Plastic Ono Band, Jimi Hendrix, the Rolling Stones, and Ike and Tina Turner along with many of the same artists that appear in Popcorn. The same format was used again in Rock City (aka. Sounds Of The City) in 1973, with lot of the same material as before. 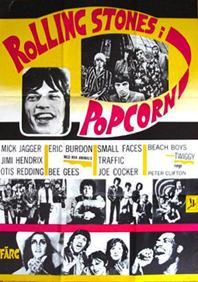 Invocation Of My Demon Brother

The Stones In The Park

An hour long documentary about the day, rather than a strict concert film captures the Stones in musical and personal disarray. The live action is intercut with an interview conducted that same afternoon with Jagger, and some fascinating footage of London's basking hairies. Incredible how in 1969 in one of the largest events of its kind ever staged in the UK, an under-rehearsed band receives warm applause and gets this incredible response from the crowd. The gig marked the hurried debut of new guitarist Mick Taylor, and the first performance of "Honky Tonk Women". Film director Kenneth Anger did shot some footage at Hyde Park for Invocation Of My Demon Brother, also Peter Ungerleiden, who premiered Under My Thumb in New Arts Lab Camden, London, March 1970, a silent black/white movie with footage from the Stones and audience at Hyde Park concert. 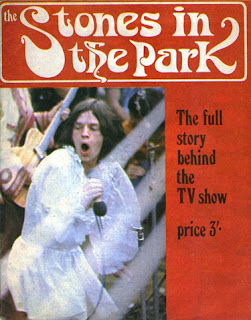