Stone Relics
DECCA (?)
Date: 1974
Acetate is supposed to exist (?)
No cover
Track listing: (?)
Note: Another LP as part of DECCA´s plan to milk the Stones back catalogue as they did since 1971.
This time is a strange compilation of well known songs with a few true rarities like "Down In The Bottom", "Tell Me Baby (How Many More Times)", "Hi-Heel Sneakers" and "Looking Tired".
This project was cancelled when DECCA received the tapes of "Metamorphosis", as part of the ABKCO settlement between Allen Klein and the Stones.
ABKCO has been working in several projects through the end of 1974 till the beginning of 1975 (the tenth anniversary of LONDON Records signing the Stones) and is reported to have two live Stones albums ready, one a selection of unreleased tracks, the other the soundtrack of "Rock´n´ Roll Circus".
post scriptum:
Bootleggers, as always, are aware of the Stones mythology too, and this one made his own "Stone Relics".
He did put the unreleased songs but throw a bunch of A & B Sides, most of them were already released in "No Stone Unturned". At least he gave us the first glimpse of the, then, unreleased "Beggars Banquet" cover. 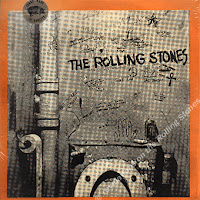 For more info on this boot:
TMOQ LPs (Revelations on the Rolling Stones)